When I woke up on my first morning of Affiliate Summit West in Vegas, I knew I’d made a mistake staying at the Westin. It’s not bad, it’s just a boring little hotel with boring rooms.

Here is part of my actual journal entry from that morning. 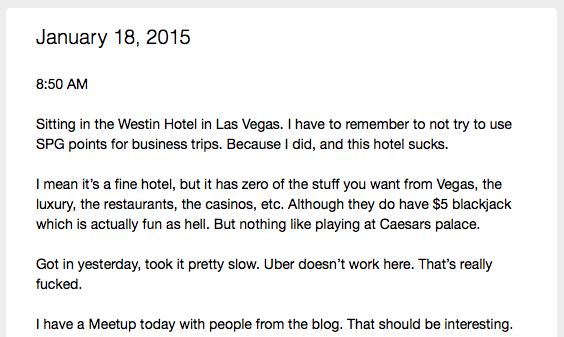 But this was definitely a first world problem. So I decided to get over it and make the most of the day. Here’s how it went down.

First World Problems: Problems from living in a wealthy, industrialized nation that third worlders would probably roll their eyes at.

Right when I woke up I could feel the desert’s dry hand choking the breath out of me. My throat hurt, my skin was dry, my lips were chapped, my head ached and my neck felt bent out of shape.

“I didn’t even drink last night” I thought. “I don’t know how these guys do it”.

Most of my friends had been out until 5 or 6am the night before. I imagined them waking up in their dirty clothes, on the hotel bathroom floor. Feeling 100x worse than I was now. Possibly near some vomit.

I felt grateful that I changed my life – and haven’t had a drink in 7 years. The benefits (including sleep quality) are limitless.

My room was cold… and I got out of bed.

One cool thing about the Westin Hotel in Vegas is that they have Starbucks coffee in the room. It’s almost the exact kind I drink at home – so after chugging half a gallon of water I had a cup – and it made me feel at home.

I turned on a playlist of 50 Cent interviews on YouTube, (really inspiring and smart as hell) and I started mapping out my day.

I had another cup of coffee and cracked open a Monster Zero Ultra and did some work in the hotel room. In the back of my mind I was curious to see how the CAFFEINE Meetup would go.

I’ve never really been a very social person, I’ve always been a background player and this was my first time introducing myself in public to other people in the industry. I was kind of excited and kind of like “what the f#ck was I thinking?”

After an hour two of solid work, some serious water intake and a hot shower I was ready to go see the outside world.

The CAFFEINE Meetup started in 3 minutes and I didn’t want to be a jerk and be late. The Westin Hotel is a little ways off the strip so the people that came were definitely going out of their way to be there. Uber is also banned in Nevada, so I knew they were being forced to take cabs and I didn’t want to make anyone’s day worse.

So I threw on one of my “it will be ok” t-shirts and took an elevator down to the lobby. 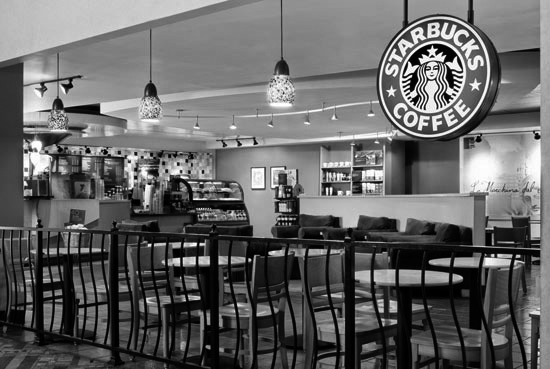 The Westin has a small casino downstairs that was blocking my view of the Starbucks where we were all supposed to meet. So until I walked right up on the place I couldn’t see anyone at all and figured the whole thing was a bust.

Then I saw them.

I saw a nice sized group of 20+ people hanging out in Starbucks, talking, having a coffee and waiting for me to show up. “Cool! people came…” I said to myself – then my heart started beating hard in my chest and I considered making a run for the exit.

I walked right up and yelled “Hello!” to everyone. I’d never seen or met most of them. One by one I started shaking hands as people introduced themselves.

It’s so cool to get to meet you – the person reading this blog. Because I share a lot on here and we interact a lot. But 99% of the time I don’t know who you are and only know you by your screenname or little profile thumbnail. So when we meet, it’s like these little thumbnails are coming to life and talking to me. It’s really kind of surreal.

There were a few people I met at the A4D Meetup last year and then a few people that I’ve known for years. There were people from all over the world, some flew 20+ hours to attend the show.

I didn’t really have anything planned, so we all just hung out. It was cool. There were several little pockets of conversations going on and I did my best to bounce around and take part in as many as I could.

A few people looked nervous so I made sure to approach them right away and introduce myself – I’m a nervous person too, I’m really bad in these situations, so I get it.

I’m not going to give away anything that I learned at the Meetup, you kind of had to be there. But I will say that during a 10 minute conversation I got some great insider info on a traffic source I’m already using. Just a few words were said about how best to use it, it was just what I needed to hear and singlehandedly made the trip worth while.

A few people talked about their strategies to keep campaigns alive on the big, popular networks that everyone seems to struggle with. I was glad to hear that – because it really is much easier than it seems.

I was really glad it didn’t turn into a hardcore Q&A session with everyone asking me how to do things. It was more laid back, like I’d hoped, with everyone talking and contributing little things here and there.

The Most Common Question

The question I was asked the most, by almost everyone there was “When are you going to create a product to sell on the blog?” And my answer is still “I don’t know”.

I mean sure, at some point the blog needs to make some money – just to justify the time that I put into it – but right now I still don’t have anything planned.

But remember, if you want to learn mobile marketing I already wrote a post about how I learned how to do it. You don’t have to buy anything from me – and I provided links so you can use all the same tutorials, tools and traffic sources that I used. Read it here.

One of the coolest things I saw was you guys exchanging phone numbers and contact info. I initiated several connections where I literally told people to get their phones out and take each other’s numbers down and start talking to each other on a regular basis.

Sometimes it’s hard to ask people for their info, I get it. But if you don’t take your chances when you get them, you may end up missing a really great connection or in some cases, a friend for life.

That’s what this thing was all about. CAFFEINE and MEETING UP.

I planned on only staying for 30 minutes – but time passed really quickly and we ended up hanging out for an hour. By noon people started heading out – we all shook hands and said our goodbyes.

I took a few photos with people (which was both flattering and embarrasing) and – that was that. 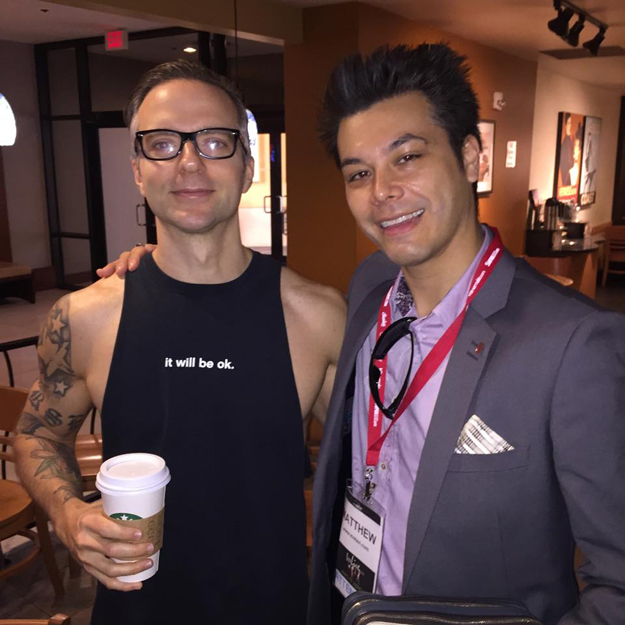 Photo: Me (with “it will be ok” shirt) and Matthew, who flew from Malaysia for the show.

The first ever MalanDarras.com CAFFEINE Meetup was done. Everyone went their separate ways but for an hour, we were all together. I thought it was a great success, I had a great time and I hope you did too.

After the CAFFEINE Meetup I decided to head to lunch with a friend. It was past noon and my intermittent fasting eating window was open (I only eat between 12–8PM). So we ran up to my room, grabbed a jacket and headed out.

Normally I’d take a hour or so break to relax, recharge and re-gather my thoughts, but I skipped that and headed out right away.

This is a theme that would continue through the rest of the day and damn near kill me by the end of the night.