One of two things just happened.

A few days ago my friend Greg posted an old photo of a band we had when I was 15 or 16 years old. Seeing it really messed with my head.

So I figured that for my birthday, I would share this photo of my glorious bleach blonde hair with you. And I’d talk about what I thought about when I saw this photograph from 25 years ago. 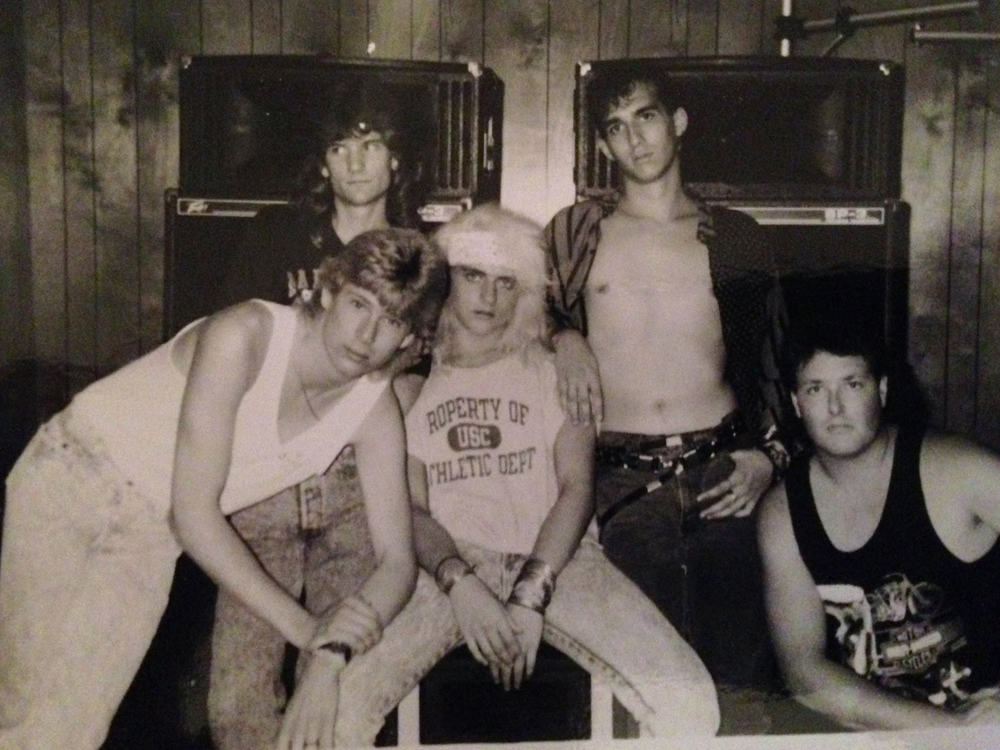 The instant I saw the thumbnail version of it I knew what it was. Black and white, group of guys huddled together, bleach blonde hair guy in the middle. This was a glam rock band photo and we

If you’re under the age of 30’ish you probably won’t get it. But in the 1980s glam rock was huge. For reference: Motley Crue was as big then as Kanye West or Drake are now.

The glam look was big too and most popular bands were full of guys that pretty much dressed in drag. It was huge in Los Angeles. In Hollywood the streets were filled with kids that looked like this… but in Ada, Oklahoma… not so much.

I was almost killed on several occasions by homophobic rednecks who thought I was gay. Most men hated me. I was just too girly-looking for them to handle.

It also didn’t help that I lived like a wild animal and had no respect for other people. If you turned your back on me for a second your wallet, all of the food in your refrigerator and your girlfriend where coming with me. But these are stories for another day.

Let me tell you about our band.

The band was called ‘Baron Zamedi’ and being in the middle of those guys in the photo, for me, was a dream come true.

My older brother Jeremy (black hair, standing on my right with his hand on my shoulder) was playing with them in another band, and they had a different singer. He brought home their demo tape and played it for me and I freaked out.

To me it sounded like a real band that would be on MTV. My brother and I had a garage band a year before. We sang through stereos and recorded ourselves on a boom box. But his new band’s music was recorded in an actual recording studio. It sounded real. I wanted to sing for them so bad it hurt.

I begged Jeremy to get me in and finally one day I got my chance. Their singer was out for some reason and I got to audition.

I sang with them once, got the gig and we started learning songs. I was so pumped to finally be in a real band with some older guys that had shows and could actually play their instruments.

We played together for a few years. Small gigs in bars around Ada. Our friends would come see us play. We’d put on our ripped up jeans and bandanas and rock out. It was a blast.

I think things fell apart when I heard Faith No More, Mr Bungle, Jane’s Addiction, Soundgarden and Nirvana and decided to launch full force into weirdo music. I chopped my hair off and joined a punk band called ‘The Bathroom’ and then formed my own group called ‘Flowermound’ that was pretty much a mix of hard rock, death metal and circus music.

But again, another story for another time.

Back to the photo

The old glam rock band photo freaked me out for several reasons.

1. I forgot how blonde my hair was. Sometimes I forget that I ever walked around like that. But instead of being embarrassed, I noticed that I had nailed the look that I was going for perfectly. I looked exactly like the band posters I had on my wall at the time. I caught a lot of flack for walking around like this. Even my good friends made fun of me. But looking back – f#ck them all… I think I nailed it.

2. My brother was touching me. My older brother Jeremy is standing on to the right of me with his shirt open. He was my idol, he got me in the band. Eight or nine years after this photo was taken he blew his brains out. Seeing this old photo of us together, so young, it brought back a thousand memories that I had forgotten. And for some reason seeing him touching my shoulder sent shivers all down my body. Not in a bad way. I was just appreciative to see us together like that. Rock n Roll brothers in full force. We were all we had.

3. My face. Look at my face in that photo. It pretty much describes the way I felt back then. I was 15’ish so my Dad’s suicide probably happened right around this time. I hated life and the world and everyone in it. All I cared about was music. I wanted to get famous, get rich and go to Hollywood, CA. Everything else was a joke. I quit school, started drinking a lot and went nuts. I may have looked like a blonde-haired sissy, but deep down, my heart was filled with hate, darkness and rage.

4. I remembered how determined and focused I was. All I thought about back then was making it as a singer. I saw no other option for myself in life. It was either Fame or Death. I lived in the middle of nowhere, my family was poor as shit, my dad was dead and this was my only way out. It was actually nice having that kind of singular focus. I kind of miss it. I got into computers and design in my early 20s. It provided financial stability, but it also completely derailed my desperate yet focused journey towards rock stardom.

5. It made me feel guilty. I stared at the photo for a long time. I stared right into my own eyes. I could almost hear the kid in the photo say “what the FUCK are you doing? You’ve done it. You live in Hollywood (my teenage dream), you made a bunch of money. You don’t have to have a job. BUT YOU DON’T PLAY MUSIC AT ALL!” I felt really stupid about everything I’ve been doing for the last few years. I completely derailed my music ambitions and spend all my time on the marketing stuff. And while lucrative, it doesn’t fill the gaping hole in my soul that aches every day and can only be filled by playing music (or black out drinking Jaegermeister).

6. It reminded me of a conversation with my dad. A few years before his death my dad came to me to talk about music. He was probably 40 or 41 (the age I am now) and said he wanted to give music “One More Shot”.

He was a really good drummer and toured the country with bands for most of his younger life. But his drinking and the fact that he had a wife and 5 kids got in the way of it and he ended up drinking himself to near death on a regular basis while working in fiberglass factories and oil fields to pay his bills.

When we had this conversation I was probably 14 or 15 years old. I remember thinking he was way too old to be talking about music and he needed to get his head on straight.

Now here I am. I am the exact age he was at the time and I am thinking the exact same thing. “I’m going to give it one more shot”.

Obviously my situation is different from his. I don’t have kids and I don’t have to work a 9–5 job. But I’m the same age he was. And if I thought he was too old to play music back then, what makes me think I’m not too old to do it now?

// As I type this I realize it’s stupid. No one is ever “too old” to play music. (I originally decided I was “too old for music” when I was 26) It’s just a conversation that’s been going on in my head for years that I’m sharing with you now to try to work it out.

So Here I Sit

For my birthday this year I am giving myself four things

The only gift I ask from you this year is your support. If you like what I do here on this website let me know. Drop a comment, tell a friend. Give me a virtual high five when you can.

As an artist, I am so overly critical of myself that it’s almost impossible to get anything done. I talk a lot about overcoming fear, but that is only because I struggle with it so desperately. It’s silly and I’m a little ashamed to admit it.

I’m being very honest here. I hope you appreciate it.