In the 1970s and 80s music used to come out on big discs that had sounds physically imprinted on them. They were packed into cardboard sleeves and driven by trucks to record stores for fans to buy. (God that seems so caveman’ish now, doesn’t it.)

There were two different kinds of records.

The single was the hit song. But the hit only took up one side of the record. There was also room for another song on the back. They called the two sides “A” and “B”. The hit single went on the “A Side” and the other track was on the “B-Side”. 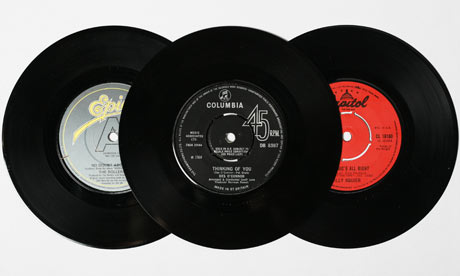 The A-Side was pretty predictable. But on the B-Side, you never could be sure what you were going to get.

Your Thoughts Have B-Sides Too

Last year I wrote about how I deal with negative thinking. And I wanted to bring it up again because I think it’s important.

Whether you’re doing online marketing, trying to lose weight or write your next album. If you get caught up in this kind of thinking you will be stopped dead in your tracks and fail miserably at everything you do.

A lot of us get beat up by self-talk every day of lives, myself included. It can be crippling if you let it go unchecked. But if you do a few simple things you can beat it.

Here’s how it works:

My head talks to me all the time and it doesn’t always have a lot of nice things to say. Over time, I started paying more attention to it and realized that when something went wrong, my brain separated my inner dialogue into two parts.

Example #1. If I ran an ad campaign that failed, the thought would go something like this:

“That ad campaign didn’t make any money, because I’m a loser, I’m horrible at this and nothing is ever going to work for me again. So I might as well quit for good.”

Example #2: I dieted and worked out but didn’t lose any weight, my brain would say:

“I didn’t lose any weight this week… because I’m a big fat loser who can’t do anything right and I might as well just eat a bucket of ice cream because nothing matters.”

Image: A visual example of how “B-Side” thoughts work.

If you want to instantly feel better about life and the work you’re doing try rewriting your own B-Sides. Rewrite them using reality-based language that doesn’t condemn you to death for making a mistake.

Take the example above: “That ad campaign didn’t make any money, because I’m a loser, I’m horrible at this and nothing is ever going to work.”

Now, let’s rewrite it: “That ad campaign didn’t make any money. But I always learn from my mistakes and I know that if I keep trying and testing I will find something that works.”

And now the second: “I didn’t lose any weight this week… because I’m a big fat loser who can’t do anything right and I might as well just eat a bucket of ice cream because nothing matters.”

Now, let’s rewrite it: “I didn’t lose any weight this week. But I know that this takes time to figure out and I’ll keep trying until I find something that works for me.”

See the difference? The change can be life-altering if you can remember to do it. Here’s a simple 3-step process that will make it easier to keep in mind.

If you can remember to do that on a regular basis, I have no doubt you will feel better right away. You’ll make faster progress and finally pull off whatever goal you’ve been chasing for years without success.

[Hey, like this kind of  stuff? Click here to get on the free weekly newsletter and I’ll send you more.]

Sometimes the mind can be a pretty crazy place to be. There are a lot of negative voices and self-talk that go on 24 hours a day. Left unchecked that can drive you mad and make you give up before you should.

But by paying attention to your B-Sides and rewriting them to be more realistic, you have a much better shot at continuing forward in life, accomplishing the goals you set – and more importantly…

holding on to your sanity.