A few days ago I was walking home from a neighborhood frozen yogurt shop.

In my neighborhood the streets are lined with palm trees. Hollywood star’s names are printed on the sidewalks. It’s almost always sunny and 75 degrees.

Well, sometimes it is… But other times it’s horrifying.

There is a huge population of street people here. Homeless people, panhandlers and mental patients litter the streets like leftover paper cups and candy wrappers after a street parade.

They sleep on the sidewalks, they piss in the parking lots and they walk around like zombies.

Today I’m going to tell you about an experience I had with one of these folks. A story about how a panhandler added a simple twist to his “begger’s plea” (Can I have a dollar? etc.) that made me stop in my tracks, turn around and immediately hand him $20 dollars.

Then I’ll show you how you can use it yourself for your own gain. 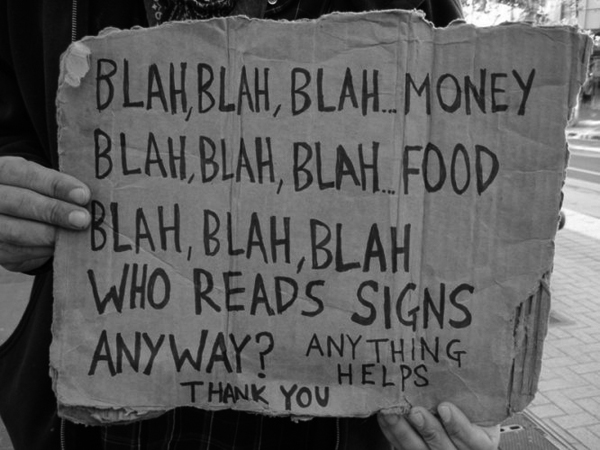 Welcome To The Jungle

Now, before we get started I need to paint a picture of the neighborhood.

You’re driving down Vine street, between Sunset Blvd and Hollywood Blvd. Each side of the street is a completely different world.

On the left side of the street you see a line of Rolls Royce, Mercedes and Lamborghinis. Valets are rushing around in circles opening car doors for the celebrities and models inside. They spill onto the sidewalk and stumble into a high end sushi restaurant where they’ll drop anywhere from $200 – $10,000 on dinner and drinks.

On the right side of the street, a 57 year old homeless guy, is standing in the road blocking traffic. He fishes around in his backpack for something. He then proceeds to pull down his dirty sweatpants and underwear and take a steaming, hot dump into a mayonnaise jar.

I’ve been here for several years now and the neighborhood is the strangest mix of glamour and horror.

I go for 20–30 minute walks around the neighborhood during the day. I’d say that during these walks I get asked for money four to five times, every time.

Most days it’s the same people asking. I’ve seen them every day… over and over again. I’ve gotten pretty sick of them.

In the beginning I gave out money. I have extra cash and I’ve been in some near-homeless situations before so I’ve always enjoyed giving out some cash from time to time. Especially if their sign or story is good.

*Side note: Once, in Dallas TX a friend and I were driving around drunk downtown. We spotted a homeless guy near an entrance ramp to the highway. He was holding a rainbow-colored sign that said ‘VISIONS OF ICE COLD BEER’. We were so impressed by the creativity and honesty of the sign that we pulled our car up to him, handed him the case of beer we had just opened and gave him all of the money we had in our pockets.

But over time I’ve become jaded.

Giving money to someone once is fine. You think that maybe you’re helping them get a room for the night, or just a little dope to ease their withdrawals. But when you see the same guy (or girl) in the same spot month after month, year after year, it gets really old.

So I’ve learned to tune them out.

*Banner blindness = an advertising term for what happens when people get so tired of seeing your ads, that they tune them out. They no longer see it.

At first you notice and acknowledge every homeless person you see. You smile, nod and give them money from time to time. But over time you get sick of it and start looking away.

That’s where I was on this day – I’d say that by the time I came across this particular panhandler – I hadn’t given anyone money for at least 3 years.

This is where today’s story comes in.

I was walking past the coffee shop on my corner and saw a guy standing there. A new guy, maybe 30 years old at the most – probably a drug addict. He was covered head to toe in filth from what looked like several months of sleeping on the street with no shower.

Something written on a piece of cardboard… you know, pretty standard stuff.

As I walked past him he said something like “Hey man can you help me out with a dollar?” It was such a bland homeless plea that I didn’t even really hear it. I responded with my standard line, “Nah, I aint got it man…”.

Anyway – he hits me with his crappy line and I hit him with my instant denial and walked away.

And that’s when it happened.

The Phrase That Pays

It was like I snapped out of a dream.

His words hit me hard. I mean, you never hear something like that from a homeless person in this area – ESPECIALLY if you don’t give him anything.

And then I heard him say it again.

A woman had just walked by without giving him any money and he said the same thing again. “That’s OK… have a great day and God Bless you…”

When I heard him say it the second time I stopped walking.
I reached in my pocket and grabbed a $20 bill.
I turned around, walked towards the guy and handed him the money.
Then we had a short conversation.

Him: “Woah thank you dude!”
Me: “No problem, I really like the way you handled that”
Him: “What do you mean?”
Me: “The thing you said after I didn’t give you any money”
Him: “Really? What did I say?”
Me: “You said: Have a great day and God bless you”

Then he went off into some wild story about how his backpack had been stolen that morning, and how his phone was stolen and he needed to get to the bus so he could…

At that point I had to escape the situation. He was about to drag me into some seriously crazy sh#t. But anyway – here’s why this was so interesting.

Guy: “Hey can I get $5 from you bro?”
Me: “I ain’t got it man”
Guy: “Well FUCK you then mother fucker, you’re nothing but a piece of shit anyway. One of these nights I’m going to find you on these streets and slit your throat!”

So this is what I was expecting from the guy standing in front of the coffee shop with the generic cardboard sign. I expected him to ask me for money, I’d say no and then he’d curse me out.

But that’s not what happened.

This guy asked me for money.
I said no.
Then he said “Have a great day and God bless you”

And that little twist completely changed the outcome of the situation.

Instead of me walking by, giving zero dollars, I stopped, turned around and gave him money.

So What Does This Have To With Anything?

After I walked away from the situation my head started working. I love taking real world experiences and testing them out on online ad campaigns.

So while I was walking away from the panhandler… and my $20 dollars, I started thinking of how I could apply the technique he used on me -to a landing page.

Here’s what came to mind:

What the panhandler did to me in the story above is the equivelant of an “Exit Pop”. [You know… that box that pops up when you’re about to close down a webpage.]

Normally it says something like “WAIT! Don’t miss this great opportunity!”

They’re annoying as hell but they work. I’ve seen lifts in revenue from 10–30% by hitting people up one last time before they go.

But what if instead of screaming “WAIT PLEASE DON’T MISS THIS OPPORTUNITY!!!!” we said something like.

“Hey, I see you’re about to close the website and down. I just wanted to say that it’s OK that you’re leaving without buying anything. Have a great day anyway.”

I’ve never seen it done before. I actually don’t have any campaigns that allow exit pops right now either. So feel free to take that idea and try it out.

Next I thought of how I could use the “That’s OK… have a great day and God Bless you…” phrase on my landing pages to get more people to click and buy.

I was reminded of an old trick I’ve done for ages. It works about 50% of the time. Here’s what you do.

Imagine you have a big red button at the bottom of your page that says “BUY NOW”.

But what happens if you said a little something extra, directly after the button that could change people’s minds?

I’ll tell you what happens: If you get it right, it makes people go bat-shit crazy with clicks on your call to action button.

Instead of a big red button that says “BUY NOW” you add something directly under it that can change someone’s mind. But you have to get it right – and do a lot of testing to figure it out.

Because the magic is saying the right thing, at the right time. Something that will help eliminate whatever hesitations people have that will make them say no.

Imagine a woman is reading your landing page about a Rolex watch.

She reads your headline and sub-headline and is moderately interested… But she isn’t sure she should buy the watch, because it’s $7500.00. Which for her is 2-months pay.

She scans the landing page copy, reading the headlines and bolded text. In her mind she is thinking “No, No, No” every step of the way.

Finally she gets to the big, red BUY NOW button and said to herself “No, I will not buy this Rolex watch today. It’s just not in my price range right now”.

Then she sees a small blurb of text under the BUY NOW button and reads it.

It says: You’ll be happy you did.

“Wait!!” she thinks… “I want to be happy! That’s the whole reason why I’m looking at expensive jewelry anyway. Now she excitedly thinks to herself —  “I WANT TO BE HAPPY! I WILL BUY THIS WATCH!”

Here are a few real examples that have worked for me in the past.

BUY NOW.
You’ll be happy you did.

Adding a killer secondary thought or phrase to the CTA could (and totally does) change people’s minds enough to get them to click and buy.

Just like I did after hearing the panhandler – the people who would have said “NO” – freeze in their tracks, turn around and give you their money.

*Psssst: A little warning – I tested the panhandler’s exact words on a landing page. The results weren’t good and it was removed. So if you’re going to play with this, be sure you come up with a 10–20 different phrases and test them yourself to find a winner.

Today I’ve shown you how a homeless, panhandler on Sunset Blvd. converted me from a passerby into a source of income.

After declining to give him money he said “That’s OK… have a great day and God Bless you…” Those words made me turn around and gave him a $20 bill.

I’ve given you some practical examples on how you can use it on your landing pages to make more money. I hope it helps you turn the thousands of people who are walking past your offer without buying – into paying customers.

I really hope it helps you.

But if it doesn’t…

“That’s OK… have a great day and God Bless you…”

Today’s question: Have you ever given a homeless person money? Was there a sign or phrase that made you do it? If so share in the comments below.