When you look at the desk of any professional computer geek there is one thing that you are almost guaranteed to see.

I’ve worked with graphic designers, programmers, video editors and online marketers and the concept is echoed by almost all of them. “More monitor(s) equals more productivity.”

Now don’t get me wrong. I’m not bashing people with multiple monitors at all. In fact I am the owner of two 30 inch Mac Cinema Displays and there are a lot of benefits to having gigantic screens.

These are all great things about having a bigger screen.

But I hear a lot of people saying that you need a big screen to get more work done, or that having multiple monitors makes you more productive. And I’ve become suspicious that this, like most of the things you’re told in life just isn’t true.

It’s just another old idea that someone came up with a long time ago that we’ve all been repeating it ever since. I call it “The Echo Chamber” and when I hear the echo I have to investigate to see if it’s true for me. With this thought in mind I decided to run a desk setup experiment.

The idea: Could I make as much money using only my 13 in. Macbook Air as I could with a big, multi-monitor mega desk?

To begin, I took a look at my current desk and… it was a mess.When I moved into my apartment I just pushed a desk into a corner, turned on my computer and started working. I haven’t given it much thought since.

What I ended up with was a mess:

Step one was to get rid of all of it, leaving only my laptop and a chair. 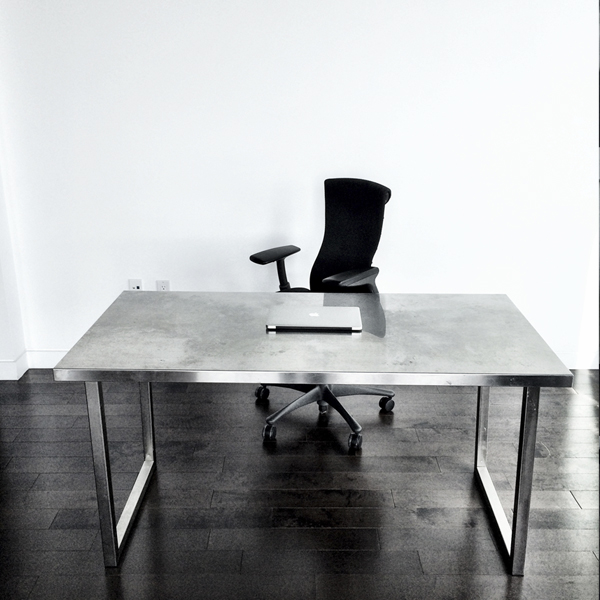 Photo: The new minimal desk setup with nothing but a laptop and a chair. 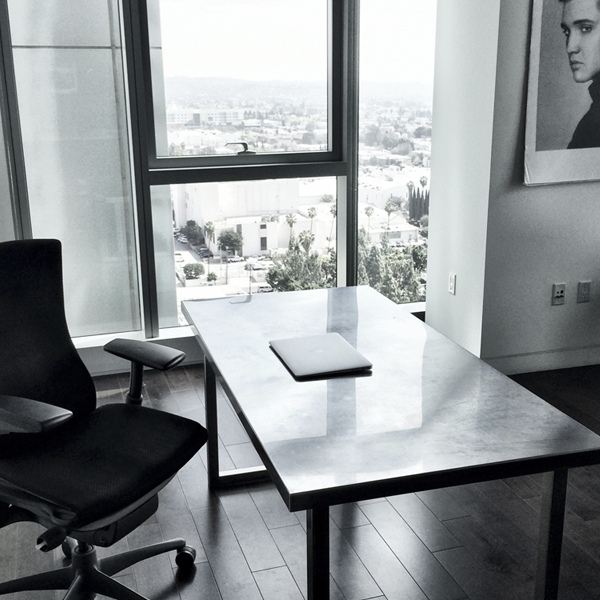 Photo: The new minimal desk setup was so beautiful that I shot it from multiple angles.

The Elimination Process was simple. I remembered an old talk I’d heard about minimalism and how to reduce clutter in your home. The concept was that you packed your house like you were moving out.

I did a small version of that and packed up my desk.

I took everything off of the desk, until it was completely empty and put it into boxes. No mouse, no laptop, not a single cable was left behind. I wiped and cleaned the desk and looked at it and decided what I needed to bring back.

At first all I brought back was the laptop. I placed it in the middle of the desk and opened it. This was really all I needed, so I left everything else in boxes and started to work.

Slowly, I started to bring things back. 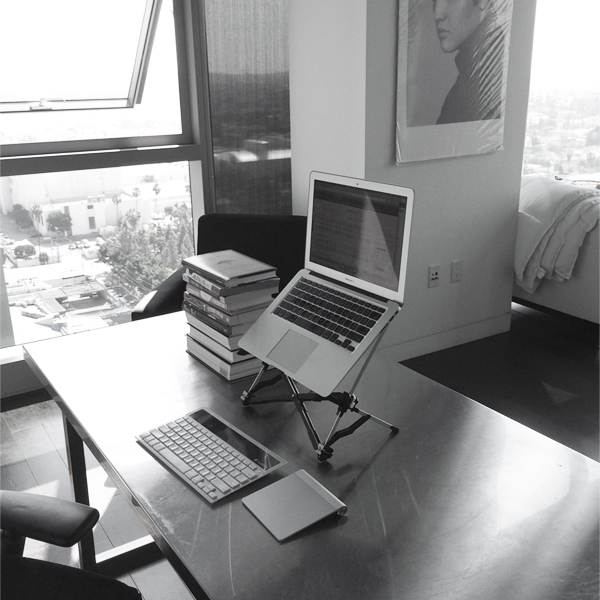 Photo: Final minimal setup that I used for the last 3 months.

That was it. That was my total desk setup for most of the next three months. It was a thing of minimal beauty. The reduction of clutter and cords instantly set my mind at ease. (Clutter drives me nuts)

I began working and over time I had a series of thoughts and experiences, which I would like to share with you today.

Benefits of Using A Minimal Desk

Did a Minimal Desk Result In More Money?

So all of the benefits listed above are great. But my initial question was could I make as much money with a single Mac Airbook as I could with a multi-monitor mega desk? So after the 90 days was up – I did the math.

During the Minimal Desk experiment I saw a net profit increase of +392.99%.

I can’t attribute all of it to the new desk and I’m not saying it was a direct result of the changes I made. But… it happened.

My Takeaway: I can definitely work on a minimal desk without losing money.

Working without an external monitor taught me that you don’t need a big monitor to be more productive or make more money. In fact, [tweetable]using a minimal desk setup increased my profits by 392.99%[/tweetable].

Gear doesn’t matter (for me). I can do everything I need to do with a single laptop monitor.

Of course, not everyone is like me and can use a standing desk made out of an iPad and a rubick’s cube.

Some people have legitimate reasons to have several monitors. I have another friend who runs 10+ virtual machines at a time and he also like to have a screen for each one .

But for the majority of people a single laptop screen is enough to get the job done. And if you’re into a minimal lifestyle – it’s a great thing to try.

Here’s what you do:

You may find that you really do need a mega-desk.

Or you may find yourself the executor of a highly profitable garage sale.