Today I’m going to show you how to create the most important document of your life. It will give you an edge over the average 95% of society and fast-track you towards pulling off your big dream.

I did it seven years ago completely by accident and less than one year later everything had changed for me.

I call it a Personal Manifesto.

Here’s how it works.

In 2008 my life was really uncertain, to say the least.

I was at the end of a long, losing battle with alcohol. I had burned bridges with a lot of my friends. I was depressingly sick of the monotony and corporate bullshit that came with working at advertising agencies and my musical aspirations had all fallen to pieces. (mainly due to my out-of-control lifestyle)

But for some reason, I had hope.

I was packing my things and moving from Oklahoma to California to pursue a new love interest and take a fresh shot at the music business on its home turf. I packed my things into the back of my car and drove for 24 hours straight without stopping.

In other words… I got the hell out of Dodge.

Shortly after I arrived in Cali, the relationship fell apart. I didn’t know anyone else in town so I spent a lot of time alone during those first few months, working on some SEO (search engine optimization) projects that I’d been running for a year or two.

At this point they were making a few grand a month, which was just enough to pay the bills.

But I knew there was something bigger out there.

I heard about a co-worker in Oklahoma that was making $30,000/month with a credit card review website. I talked with him about and I got to see what it was. It was real and ranked for every credit card related keyword in the English language.

He ended up selling it and making enough money to quit his job at the ad agency and retire from 9–5 for good.

I wasn’t jealous, I was set on fire.

I had proof that this online thing worked… all I had to do was figure it out.

SEO and article writing were the only methods I knew about at the time, so I dedicated myself to working on it as hard as humanly possible until I’d built it into a goldmine.

For some reason, out of nowhere, I had the idea to write out a plan for what I was going to do, before I started doing it. I’d never done this before and have no idea why I thought of it this time.

Normally I just launched into things like a raging bull. No planning, no thinking, just racing forward off the edge of a cliff. (That never worked very well.)

But this time I thought it might be a good idea to type out my plan into a document of some kind to make everything as official as possible. I needed this to work.

I opened up a Word document and started typing.

“My name is Malan Darras and I am going to dedicate my time and energy to building a money printing SEO business online. I will do this by working 8 hours a day, writing at least 3 new articles a day, six days a week all year long. I will publish them to my websites and get backlinks and…”

It went on and on.

Then I wrote out everything I was going to do to get there and what I was willing to sacrifice to make it happen.

I wanted FREEDOM and to never have to work a job again. I wanted to avoid the rat race and average paycheck-to-paycheck lifestyle completely. That was always my goal. And this seemed like the way to do it.

I promised myself that I would work my ass off. I would trade my social life and music aspirations if I had to, to get the work done and figure this internet marketing thing out and change my life.

It took about an hour. I typed it all out in one shot. I gave very little thought to the structure or if it was even possible. I just emptied my mind, dreamed big and planned out my next ten years online.

I saved the little document into a folder on my computer and forgot about it.

[Click here to get a free Personal Manifesto Guide (with template) you can use to start today.]

I had no idea at the time – but writing out your goals is a pretty standard practice for most successful people. You see – No one ever taught me anything growing up, so I spent most of my life just ramming my head into walls hoping that at some point, a door would open up.

Apparently, that’s not how things work.

Rich parents tell their kids stuff. Like “hey son, choose what you want to do with your life and then write out all the steps to get there and do a little work every day”.

But I’d never heard about this before, I had to kind of make things up as I went. When I wrote my Personal Manifesto, I just had the idea and did it.

It wasn’t until years later that I read about how important writing down goals (and the steps needed to get to them) really was.

Here’s a really good example from one of my favorite books:

The first time I read Think and Grow Rich by Napoleon Hill, my head exploded.

This dude Napoleon spent a few years interviewing hundreds of the most rich and powerful men in America and wrote the book using all the lessons he learned and the commonalities that he saw running through all of their timelines.

He boiled it all down to a six step process, designed to help anyone make a sh#tload of money if they want to.

Now – you may be thinking that this all sounds like some kind of new-age, hocus-pocus bullshit that only a fool would believe, right? Well you’re 100% wrong and you need to quit thinking that way immediately.

This is real. And here’s a pretty sweet example of how it really works. 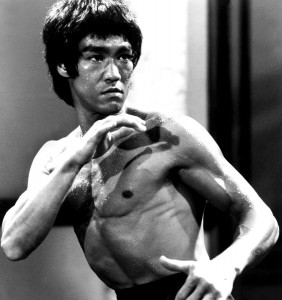 Shortly after reading Think and Grow Rich, Bruce Lee (yeah that Bruce Lee) put the process to use for himself.

In 1969 he wrote down the following goal on paper – years before he was famous in the United States. 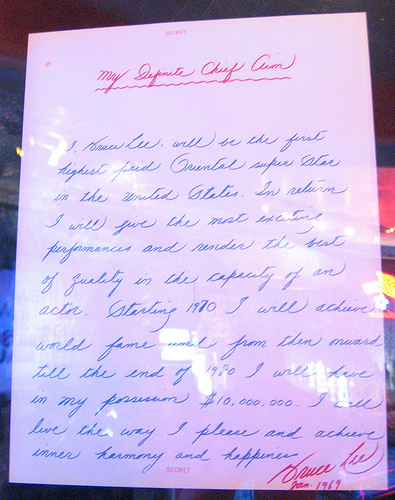 I, Bruce Lee, will be the first highest paid Oriental super star in the United States. In return I will give the most exciting performances and render the best of quality in the capacity of an actor. Starting 1970 I will achieve world fame and from then onward till the end of 1980 I will have in my possession $10,000,000. I will live the way I please and achieve inner harmony and happiness.

My format was a little different, but it worked too. This is why I believe you can craft the Personal Manifest in whatever manner you want as long as you follow most of the steps. You just really need to specifically state your dream goal, the time it is going to take and what you’re going to do to get there.

When I wrote down my Personal Manifesto that day in 2008, I accidentally tapped into one of the most powerful success rituals known to mankind.

Writing down your goals.

How to Write A Personal Manifesto

By now I hope you see what a weird, magical thing that writing down your goals can be. I did it, Bruce Lee did it and now, you can do it too.

But where do you start?

Well, you can take the ‘Think and Grow Rich’ model from above and do it that way (it worked for Bruce Lee) or you can follow my outline below (it worked for me).

Don’t get caught up in little details like “what app should I use to type it in” or “which font did you use?”. Just get started. The most important thing is that that it gets done.

How To Write Your Personal Manifesto

Strangely enough – for me, the most important thing was just to type it all out. That’s all it took.

After typing up my Personal Manifesto back in 2008 I saved it to a folder and forgot about it. More than a year later I found it and read it.

It was only then that I realized I had accomplished everything I’d written down (times 10) without even realizing it.

It took less than one year to hit my ten year dream goal.

That’s how it happened for me.

It can work for you too.

The Personal Manifesto is the truth.

[Get the free Personal Manifesto Guide (with template) so you can do this too.]

We all say we want to do big things and make millions of dollars. But most of us never take the time to write down the thing we want and all of the steps it’s going to take to get there.

In 2008 I wrote out all of my goals, the timelines and the necessary steps into a Personal Manifesto. Less than a year later, all of them had come true and some of them were 10x bigger than I’d dreamed.

Take some time this week and type or write down the thing you want to do. Then write down all the steps you’ll need to get there. Then apply timelines to each step.

A year from now you might find yourself where I am today.

Sitting in a desk chair that costs more than your first five cars combined
Drinking a cup of hot, black coffee
Typing up your thoughts to help the next generation