“Screw the whole thing” I said to myself… “It’s just not worth it.”

By my second morning in Las Vegas I decided I’d had enough. I felt awful, my head hurt, my skin was dry and I didn’t sleep well.

But like a lot of other mornings in my life, it only took a toothbrush and a few coffees for me to change my mind, and I was glad I came.

Affiliate Summit West 2015 has come and gone and looking back at it now, I’m glad I went. I got to see a lot of old friends, meet a bunch of new ones and hold my first Meetup.

I’m going to split the days up into separate posts. Today I’m starting from the beginning. The day I flew to Vegas.

I hate traveling. It’s one of those things everyone says you’re supposed to enjoy. I know there are benefits to travel and I love the experiences I have when I get there – I just hate getting there.

This year I’m trying to make travel more enjoyable. So I’ve been tweaking things like the way I buy plane tickets, the amount of time I allow myself to decide which hotel to stay in and even the kind of suitcase I carry.

For this trip I wanted to try traveling ultra-light, with nothing but a single messenger bag. I didn’t own one, so I bought a new one for the test. It’s a Rothco Classic Messenger Bag. I got it for $26 on Amazon and as you can see, it’s as basic as it gets. 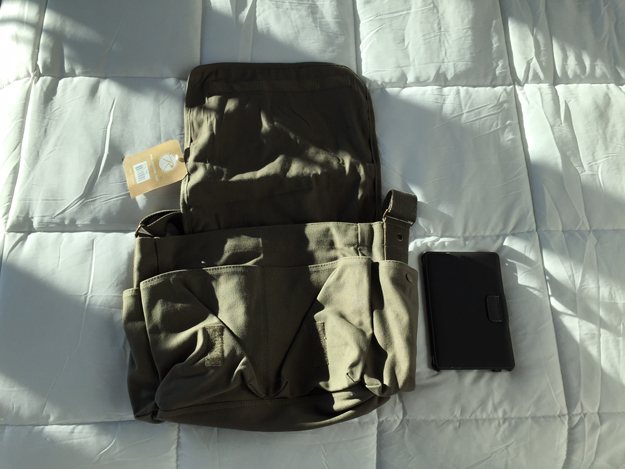 My thought is that by limiting the amount of space I have, I’ll be forced to bring only the essential things I need to get by – and absolutely nothing else. Less stuff means less headache (and less weight to carry) during the trip.

I mean, how many times have you unpacked your suitcase after a trip and realized you didn’t wear half of the stuff you packed? That’s what used to happen to me, so I started taking note of things I didn’t use and stopped bringing them with me on trips.

For this trip I packed:

I only bring one pair of jeans and shoes and I wear them out of the house. All of my clothes are rolled and put in packing cubes, one of my favorite purchases from last year. I can fit all my clothes for the trip (minus the sweats) into a single cube.

Here’s what my all of my clothes looked like on the way out of the house. The only things that were added were a small bag of toiletries and a laptop.

Below: Clothes rolled up in the packing cube. 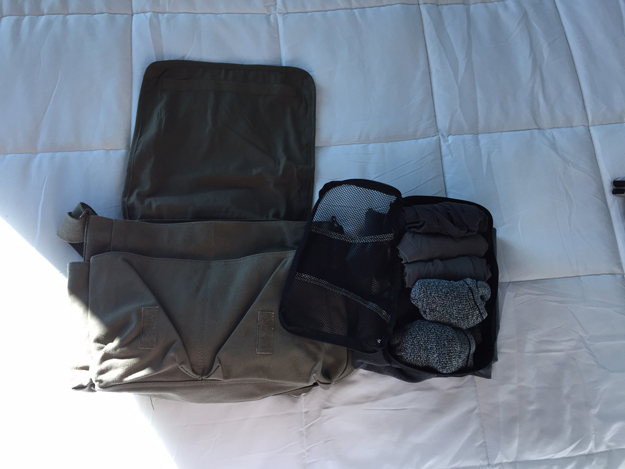 Below: Everything packed. Without the laptop. 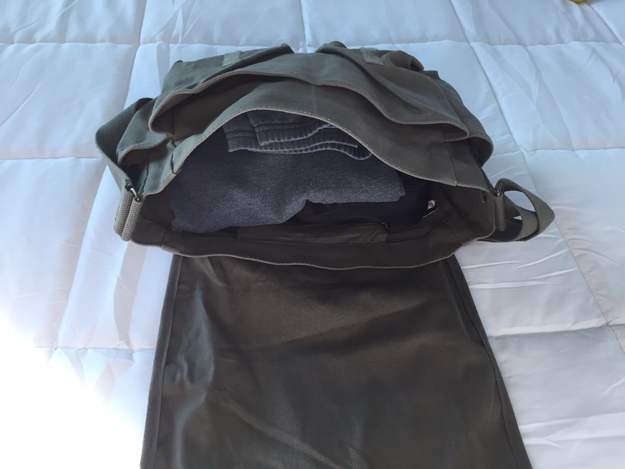 What’s funny is that after this trip I realized that I had overpacked.

I ended up not wearing two of the four shirts I brought. I wore one shirt on the flight there, then again next day and then I used it for a gym shirt. I wore another shirt the other two days.

Note: From now on I’m only packing one shirt for every two days of the trip.

I threw my bag over my shoulder, hailed an Uber Plus and 5 minutes later I was on my way to the airport in the backseat of a black Mercedes.

One thing I screwed up this trip was booking the flight there. I booked on Virgin America because I love the airline. The problem is they only fly out of LAX which is a 50’ish minute drive (with moderate traffic) from my house.

I normally like to fly out of Burbank. The drive is only 20 minutes and it’s a much smaller and less crowded airport than LAX. So by booking on Virgin I added about 30 minutes to my drive time.

The drive took almost an hour. I fell asleep in the backseat while listening to ‘The Power of The Dollar’ by 50 cent. Just before I passed out I was feeling a lot like a mother f#cking gangster. That album does it to me every time.

The driver was kind enough to wake me up as we approached the airport.

Normally flying with Virgin America is great. They have a cool counter check in area with dance music playing. Most of the employees are attractive and it kind of feels like a club atmosphere. They try to be hip. 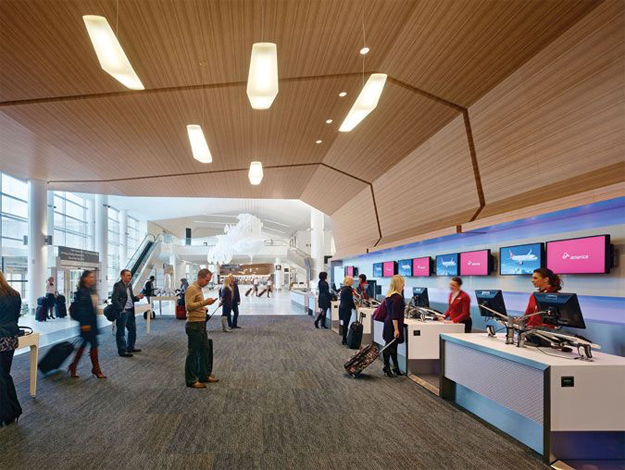 Photo: This is what a Virgin check-in counter is supposed to look like.

I probably stood in line for 20–30 minutes just to get checked in. I normally do it online, so I hadn’t really budgeted the extra time. By the time I finally got my boarding pass, I was worried I might miss the flight.

By the time I went through security and made it to the gate the flight was starting to board. I was in the A group and I got there just in time. I walked up and boarded right away.

The flight was packed with this year’s round of new affiliate marketers hitting it big for the first time. They’re really easy to spot.

It’s really silly. I think I saw 3 Louis Vuitton baseball caps on the flight… it made me want to throw up.

Tip: I think we all go through that phase, when you make a big chunk of money for the first time it’s easy to get caught up and think you’re the shit and start dressing like a rapper. My advice is to get over it as soon as possible.

The best thing about the flight was that it was short. Flying from LAX to Las Vegas takes about a 45 minutes. So by the time you get a bag of peanuts and something to drink, the plane is landing.

This is really nice for a guy who can’t stand being on airplanes.

After we landed I opened up my Uber app and tried to get a car. The app showed an error message that immediately ruined my life.

“We’re sorry, due to a lawsuit Uber is not available in Nevada.”

I kind of froze for a second because at this point I’m pretty hooked on Uber. So I was pissed that I’d have to go back to taking cabs.

Outside the airport I was told to stand in a taxi line. There were about 40 people in it. After 15 minutes of waiting in the cold – I finally got a taxi.

As I approached the cab, the driver looked at me with a cold, empty stare and asked, in broken English “Where YOU are going?” “Westin Hotel” I replied.

The driver said something like “F#ck this mother f#cker shit” as he turned around and got back in the driver’s seat. “Welcome back to the wonderful world of Taxis” I thought, and we drove away.

I put my headphones in and listened to music for the whole drive. He never said a word until we arrived. As we stopped in front of the hotel he said “Receipt” as he handed me the receipt. That was it.

I stayed at the Westin because I booked the trip with my American Express SPG app – and it was the only hotel available near the strip. I’m hooked on getting Starwood Points so I booked the hotel even though I’d never seen it before.

I was seriously underwhelmed.

I’ve stayed in worse hotels (and roach motels) in my time – but when you come to Vegas you expect the over-the-top luxury. This place wasn’t horrible – but it looked like a nice Holiday Inn in a small town in Idaho.

“Well, this is f#cked…” I said to myself and I walked in to check in.

Later in the trip, I realized how great the Westin actually was. I’ll write about it later on.

For this trip I decided to try the $20 trick for the first time. I think I initially heard about it from Dr Ngo.

If you don’t know about it – the $20 trick is where you book a basic room at a hotel and during checkin you wrap a $20 bill around your credit card before you hand it to the check in person.

When you hand them your license and credit card you say “Do you have any complimentary upgrades available?” 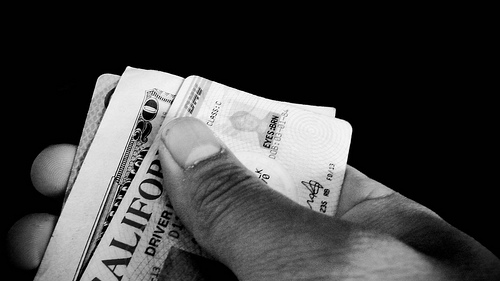 Photo: The $20 Trick in action

Hotel clerks have the option to upgrade people for free if they want to. But if you don’t ask for it, they don’t do it. So you ask.. and pay them $20 to make it happen. When it works you can get hundreds (or thousands) of dollars in upgrades for your $20.

So I wrapped my $20 around my card and asked the guy behind the counter for a complimentary upgrade. I was nervous.

Luckily, he knew exactly what I was doing and said, “Yes, let me check for you”. There were no suites available – and he apologized for that but he said he could move me from the 3rd floor to the 16th floor where I’d have a nicer view and a bigger room.

I accepted his offer and right away he started treating me differently. It was like I was an instant VIP. He came out from behind the counter and talked to me and gave me two bottles of VOSS water. He said things like “Anything you need, call me, my name is _______”.

It was kind of amazing actually.

I didn’t think too much about the bottles of water, but as I got on the elevator to go up to my room a guy asked me “Hey.. where did you get those bottles of water?” I said – “the check in guy gave them to me”.

The guy said “Damn, he must have liked you because those are like $12 each in the casino”.

I can safely say that the $20 trick works and I will use it every time I stay in a hotel in the future. They say it works best in larger cities like Los Angeles, New York and Las Vegas.

I texted a few friends to see what was going on but ultimately decided to stay in for the night. I just wanted to eat, relax and scope out the hotel, especially the Starbucks in the lobby where I had the CAFFEINE Meetup going on the next morning at 11am.

I had a quick dinner at the Westin’s (2/5 stars) restaurant called SUEDE.

I was intermittent fasting most of the day so I needed to eat a lot. It was a rest day which for me is low carb / high protein / high fat, so I went with a chicken cobb salad with extra chicken, no dressing and a piece of salmon with asparagus. 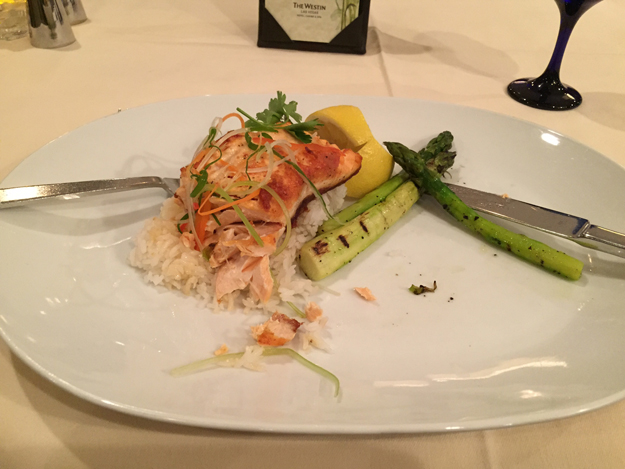 Photo: Salmon and asparagus at the Westin, I didn’t eat the rice.

After dinner I played some blackjack for an hour and picked up some more water and a supply of Monster Zero Ultras to keep in my room.

With that, I went to bed.

The next day would be the first official day of Affiliate Summit West and my first ever CAFFIENE meetup with you guys from the blog.

I wondered if anyone would even show up – or if I’d be having coffee alone in the morning (which would be cool too). But I thought “it would be really cool to finally meet some of these people face to face”.