I’ve written about depression extensively on this site in the past. And due the recent death of Robin Williams, allegedly as a result of suicide after a life-long battle with depression, I thought I should write this post.

It made me think of something I’ve considered for a long, long time. To be a great artist (or a great anything) do you have to be a little bit mad?

NO excellent soul is exempt from a mixture of madness,’’ ~Aristotle

The link between creativity and insanity has fascinated me for a long time.

I’m a big fan of The Doors and their singer, Jim Morrison. He was one of the greatest singers, poets and front men to ever grace the stage, had millions of fans worldwide, yet was drunk, depressed, maniacal, peed his pants often and died at 27 in a bathtub in Paris.

Whenever I heard the other members of the band in interviews complaining about Jim’s behavior I thought “Of course he was a lunatic you assholes, that’s what made him so good.”

The feeling was so strong that during a premiere of a new Doors documentary, attended by the surviving members of the band I was tempted to approach the guys and tell them how I felt about it. Luckily I held my tongue and wasn’t thrown out of the premiere like a madman before it had even started.

In my own life I am sure that I have benefitted from a touch of madness. Both in the music I make and the online work that I do.

It’s not just me.

Since the time of the Greek philosophers, those who wrote about the creative process have emphasized that high levels of creativity normally involve a regression to a more primitive mental processes.

That [tweetable]to be creative requires a willingness to cross the line between rational and irrational thought.[/tweetable] 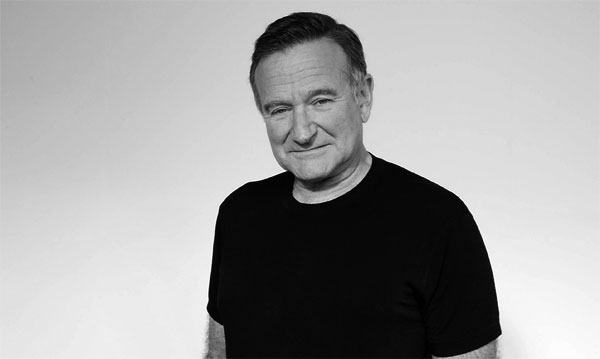 Yesterday, one of the world’s greatest comedians and actors was found dead in his California home, allegedly as the result of suicide.

Robin Williams’ epic career spanned 40 years and included gigantic roles all the way from ‘Mork’ on ‘Mork and Mindy’ in the 70’s to his latest TV show ‘The Crazy Ones’ which was just taken off the air in 2014. He’s been funny, successful, beloved, rich and famous for a long time.

It has been said that he battled depression and addiction just as long.

He was known for his mad-cap antics. His energy level on talk show appearances were like no one else on earth. For a long time I thought he must be doing cocaine before coming out to the do show, but now it seems his craziness could have been a result of bi-polar disorder and manic depression.

And he’s not alone, while most studies between madness and creativity have focused on poets, musicians and visual artists some new studies have been done on comedians that show a connection as well.

The ability to make people laugh comes from a personality of the kind displayed by those with bipolar disorder and schizophrenia.

One interesting theory is that for comedians, making people laugh may be a way to self-medicate their own low mood.

Gordon Claridge, a professor at the University of Oxford, led a study on comedians. After gathering the results he said: ‘Although schizophrenic psychosis itself can be detrimental to humor, in its lesser form it can increase people’s ability to associate odd or unusual things or to think ‘outside the box’.

Prof Claridge, with colleagues Victoria Ando and Ken Clark, persuaded 523 comedians – 404 men and 119 women – to take part in their study.

Most striking was their high scores for both extraverted, manic-like responses and socially introverted moodiness, says a report in the British Journal of Psychiatry.

Do You Have To Be Crazy To Be Creative?

There are obviously many talented artists of all kinds who do not do their work while manic or on the edge of insanity. Most researchers that have studied the subject agree that you don’t have to be crazy to be good.

Yet ideas are plenty as to why the link seems to be there so much of the time.

One idea is that the gene that causes mental disorder also produces artists, because manic depressive episodes create unique brain activities that trigger extreme swings of emotion, which the brain has to adapt to.

That process of adaptation, the reorganizing of manic thoughts – could be the essence of creativity itself.

While depression, bi-polar and a touch of madness have been found in many of the world’s greatest artists, it’s not mandatory that you be insane to be good – however it does seem to “help”.

But this is no excuse to jump off a building because “I’m an artist”.

If you feel that your mental health or depression is a problem for you – do something about it. Whether you use professional help, friends and family members, medications or lifestyle changes, do what you need to do to ensure that you’re stable and not a threat to yourself or others.

I have battled with depression my entire life and there have been many suicides in my family. But these days I have it under control better than ever before. I’m nowhere near normal, but I’m manageable.

To read more about how I changed my life, read this article.

If you’re a little bit nuts, congratulations and I’m sorry. You’ve got a long road ahead of you, but if you live – you may do amazing things.

And [tweetable] to Robin Williams, thanks for all the laughs dude. Nanu-Nanu.[/tweetable]